Chronic diseases are the leading causes of physical impairments and mortality in the world. The functional role of autophagy in maintaining cellular homeostasis implies that the molecular machinery is a compelling pharmaceutical target for such disorders involving overall body imbalance. Therefore, autophagy modulators appeared to be the ideal source for hunting of novel and effective pharmaceutical interventions. Law et al., have performed a systematic review on more than 30 different Chinese herbal medicine (CHM)-derived bioactive compounds capable of regulating autophagy activity. The successful experimental and clinical applications of these compounds which have not been previously documented have been discussed. Notably, most of the reported novel applications are associated with chronic dysfunctions.

The need for new pharmaceutical therapy for chronic diseases

Chronic diseases are increasingly affecting both the developed and developing countries over the past couple of decades1 which cover a wide spectrum of disorders, including immunological and cardiovascular diseases, neurodegenerations, a majority of tumorigenesis, etc. Patients suffering from such persistent medical conditions are subjected to prolonged exposure of drug treatment and the associated adverse side effects. Accordingly, many of the conventionally used medications upon these chronic disorders are encountering practical impediments which lower the therapeutic efficacy. For example, the long-term usage of methotrexate in rheumatoid arthritis (RA) can induce toxicity towards the gastrointestinal and hepatic systems2 which may end up to the discontinuation of treatment. On the other hand, drug resistance developed from the usage of classical drugs for these disorders is complicating the disease management. The unresponsiveness of RA patients towards the use of disease-modifying antirheumatic drugs (DMARDs) is related to multiple mechanisms including the activation of multidrug-resistance proteins3,4. In the case of tumorigenesis, leukaemia, lymphoma, cancers of colon, breast, stomach, pancreas, head and neck have demonstrated drug resistance in response to some antimetabolites which are mediated through different molecular mechanisms as well5-9. Under such circumstances, the quality of life of patients is seriously affected and the growing of socioeconomic burden is forecasted which implied the urge to develop safe and innovative interventions for chronic diseases.

Around half of the CHM mentioned in this review which are mainly prescribed for anti-inflammation, anti-infection, and immunological disorders, together with some symptomatic treatments and supplement, have demonstrated novel usages, via autophagy induction, in other chronic diseases, such as neurodegenerations, cardiovascular disorders, metabolic disease like diabetic mellitus, and different cancers through the manipulation of autophagic process. For instant, Radix bupleuri which is traditionally used for against hepatic and pancreatic inflammations has shown effectiveness in curing cervical and breast cancers in vitro by trigging autophagy via the CaMKK-AMPK-mTOR signaling. It is worth noting that Radix bupleuri also demonstrated clinical relevance to some tumorigenesis. Another intriguing example that described by Law et al., is Rhizoma zingiberis recens which is ginger in the daily dietary. Apart from the renowned functions such as the anti-cold property, Rhizoma zingiberis recens are experimentally effective in inducing autophagy to remove cervical and pancreatic cancer cells through Akt and AMPK-mTOR signaling, respectively. A few of the medicinal herbs even illustrated various new usage, for example Nelumbo nucifera and Mallotus philippensis can potentially be used in both neurodegenerations and cancerous disorders. The observed novel interventions are mostly related to the alleviation of tumorigenesis and neurodegenerative disorders (Fig 1). This is probably due to the fact that the numbers of researchers that involved in the pharmacological trial of CHM for these diseases are comparatively more thus far. Therefore, it is not surprising that the discovery of novel medications not just for neurodegenerations and cancers but also for the other chronic disorders would be increased in the future. It should also be pointed out that many of the chronic diseases are sharing molecular resemblances or mechanistically associated with each other in terms of their chronic inflammatory nature. For example, patients under long-lasting inflammatory conditions of the intestine, such as ulcerative colitis and Crohn’s disease, can lead eventually to the complication of colorectal cancers10-13. Also, many carcinogenic substances that induce tumorigenesis and malignancy are mediating the cancer progression by establishing an inflammatory microenvironment14,15. In a recent study, it has been demonstrated that the use of DMARD of RA patients may increase their risk of acquiring Hodgkin and non- Hodgkin lymphoma, as well as lung cancer16. Also, the chronic immune activation of the central nervous system (CNS) is generally featuring the different neurodegenerative disorders like multiple sclerosis, Parkinson’s and Alzheimer’s diseases17-19. Therefore, traditional decoction for cancerous or neurodegenerative diseases therapies can, in principle, be used vice versa for ameliorating abnormalities like chronic inflammatory and immunomodulatory disorders. The number of novel applications of CHM with well-known clinical functions could be much higher suggesting a great research niche of exploring new CHM-based pharmaceutical compounds for chronic diseases therapy. 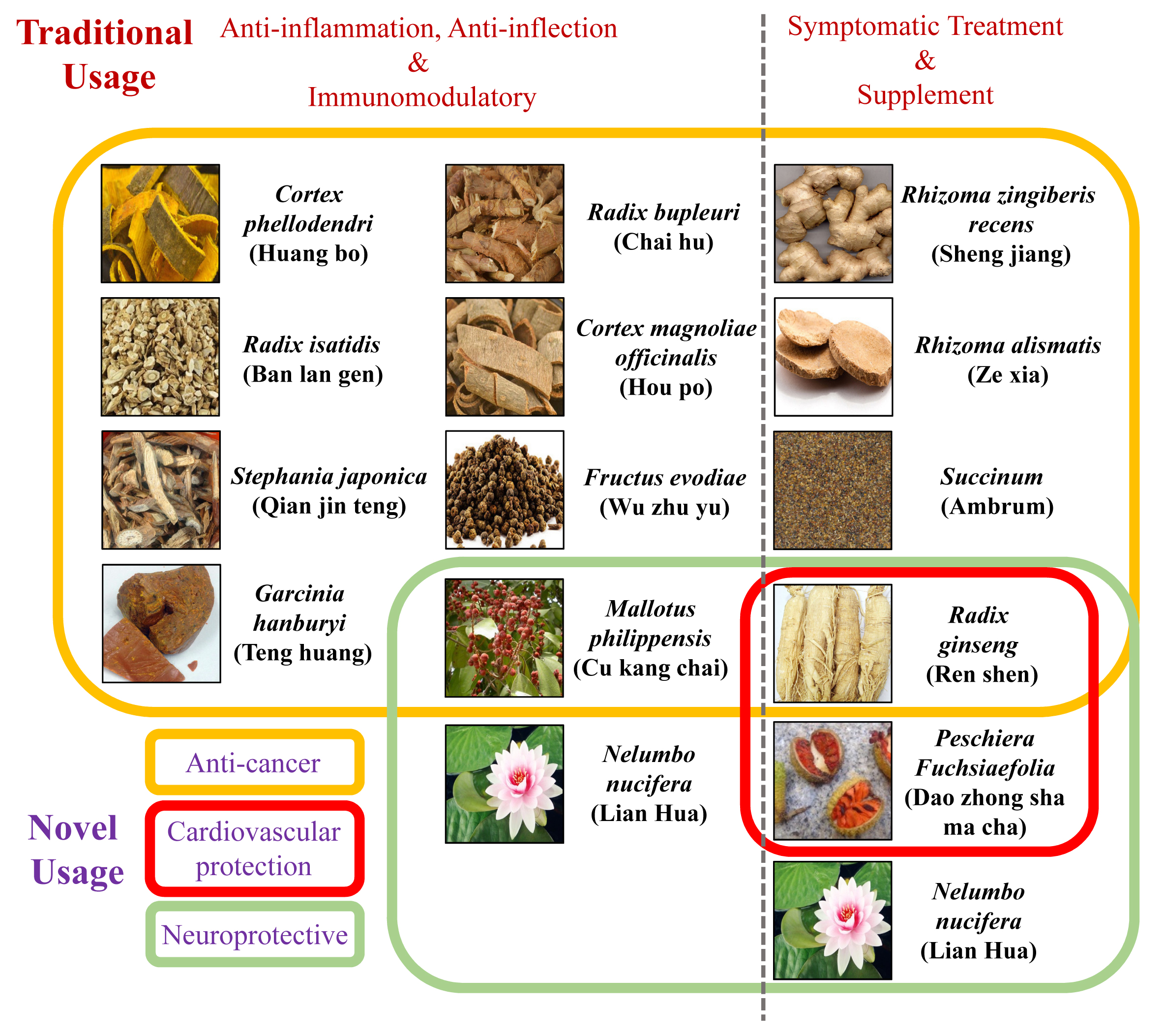 Addressing autophagy to serve as drug target for pharmaceutical development has recently drawn the attention of researchers20. Just recently, Prof. Yoshinori Ohsumi is awarded with the Nobel Prize for his discoveries of mechanisms for autophagy, and therefore this approach may be especially favorable to the discovery of new chronic disease therapies. Since, the effectiveness of autophagy is declining over lifespan, lowering of autophagic flux will lead eventually to the persistent accumulation of cellular damages and chronic conditions. In fact, aged individual is more susceptible to the development of the diverse chronic disorders21. On the other hand, such chronic pathologies, for example RA, is associated with abnormal autophagic responses which induced by environmental and genetic factors22,23. The practical use of some artificially made chemical autophagy inducers have been approved, such as temsirolimus, an mTOR inhibitor which induces autophagy and demonstrated efficacy in renal cell carcinoma therapy24. However, these synthetic compounds are usually accompanying many side-effects. Approximately 30% of patients receiving Torisel®, the commercially available temsirolimus, are encountering adverse reactions including skin rash, mucositis, and peripheral edema25. Since, CHM and the CHM-derived bioactive constituents are natural in nature, the toxicity of these compounds are at a relatively lower level, therefore, suitable for long-term consumption. Also, many of the traditional decoctions of CHM have been used safely for centuries providing a prominent platform for drug development in terms of predicting the possible adverse reaction that may bring about during the stage of clinical trial. In terms of pharmacodynamics, the multi-component CHM are acting on more than one molecular target which further tailored them best fit to the treatment of autophagy-associated chronic diseases regulated by parallel signaling pathways. Most importantly, the central dogma of traditional Chinese medicine that emphasized on the upkeep of systemic “harmony” would help filtering the suitable pharmaceutical candidates relevant to the pathological characteristic of chronic disorders which narrows down the scope of search.

Although CHM-based autophagy inducers appeared to be highly promising for the development of pharmaceutical intervention against chronic disorders, many elusive factors have to be clarified in order to successfully put them into practical use. The autophagic process comprised several signaling pathways which intervene with each other to form a complex network. The process also crosstalk with other cellular mechanisms such as apoptosis27. In addition, the functional consequences of using autophagy modulators are highly dependent on the timing of application and are cell-type specific. Taken together, further in-depth pharmacokinetic and pharmacodynamics studies of the CHM-based autophagy inducers are needed.

This work was supported by FDCT grant from the Science and Technology Development Fund of Macao (Project code: 084/2013/A3).